Yes, it’s known for swoon worthy Barossa Shiraz and Coonawarra Cabernet Sauvignon, not to mention some mighty fine Clare Valley Riesling, but dig a little deeper and you’ll find some other gems in South Australia. The last several years have seen a marked increased in the amount of what I like to call “quirky bubbles” in the region. To be sure, the demand for Pétillant Natural (aka pét-nat) wine Down Under is on the rise and producers all over the country are trying their hands at making it. Among the wine rising to the top is South Australia pét-nat. These fun, fizzy bubbles are made from a wide variety of grapes and are absolutely worth seeking out.

Led by Deanna of Wineivore, the World Wine Travel group of bloggers is exploring the world of Australian and Tasmanian sparkling and fortified wine. It’s always great to see what wines the other writers come up with and I always learn so much during our Twitter chats. For me, I’m quite excited to share my South Australia pét-nat finds.

Undoubtedly one of the most important states in Australia when it comes to wine, South Australia is home to the historic regions of Barossa Valley and McLaren Vale. These regions, along with Eden Valley and Clare Valley contain some of Australia’s (and the world’s) oldest vines – some date back to the 1840s – thanks to largely being spared from phylloxera. Viticulture has existed here for almost 200 years under the care and custody of several multi-generational families. All told, wine production is carried out in all 18 South Australian regions which has earned it the title of Great Wine Capital of Australia.

To be sure, South Australia is blessed with a variety of geographic and climactic characteristics which allows it to be able to produce a wide range of grape varieties from cool climate Riesling in Clare Valley to the big and bold Shiraz of Barossa Valley and Cabernet Sauvignon of Coonawarra. It is home to wine royalty the likes of Penfolds, Yalumba, and Jacob’s Creek.

But while the history and dedication provide the foundation, young, new winemakers are beginning to make their mark in modern Australian wine. And many of them are doing it with pét-nat.

Pétillant Natural (aka pét-nat) wines are sparkling wines made using the Ancestral Method (aka Méthode Ancestrale). This is generally believed to be one of the earliest forms of sparkling wine production. Instead of two fermentations like we see with Traditional Method wines like Champagne and Cava, the Ancestral Method has just one fermentation. The still fermenting wine is bottled and is sometimes topped with a crown cap that you’d usually see on a beer bottle. The process results in a wine that it slightly fizzy due to the trapped carbon dioxide (2-4 atmospheres), fruity, lower alcohol, some with a touch of sweetness – and a little bit of funk. And most importantly, they go down super-easy! Just add the beach and some sun, and you’re in for a treat!

Because these wines are low intervention, they tend to be more “natural” and rustic. Typically nothing is added to, or removed from the wine. No fining, no filtering, no additives, which also explains why some of these wines are cloudy and have bits of sediment floating around. Yes, with these wines, you get what you get. To be sure, when you pop a bottle of pét-nat, you never know what you may get. That may occasionally include the wine exploding or gushing out of the bottle as the wines can be somewhat unstable. Pro-tip: Make sure the wines are ice cold when you open them. I previously did a deep dive on Texas pét-nat wines, which just made me thirsty for more.

The only parameter for pét-nat is its fermentation style, so these wines run the gamut from more traditional grapes and combinations, to the use of emerging varieties and eccentric blends. Everything from red, white, to rosé is fair game. Basically, there is fruit salad of opportunitiy when it comes to South Australia pét-nat.

The regions of Riverland, Adelaide Hills and McLaren Vale are seeing a host of new and progressive winemakers that are hyper-focused on sustainability, whether using organic viticulture, biodynamics, dry farming, etc., as well as willing to explore unique and different varieties that break all the rules. Think Italian varieties like Montepulciano, Fiano, Vermentino, and Nero d’Avola. For these winemakers, it’s all about finding varieties that are amenable to South Australia’s sometimes warm and dry climate. We hung out by the pool with some meat and cheese and tried a couple of South Australia pét-nat wines.

Grown almost exclusively in Italy’s Puglia region, Bianco d’Alessano is a white wine grape that typically produces medium to full-bodied wines with apple, pear, and tropical fruit flavors. The only other place in the world it shows up outside of Puglia? South Australia, on the bank of the Murray River in the Riverland region.

In the bottle, it looks like cloudy lemonade. Based on the way it looked, I was expecting pure funk, maybe undrinkable. What I got was some damn refreshing and tasty juice! Yellow pear, lemon curd, ruby grapefruit, and a touch of herbs. And it goes down dangerously easy, especially since it’s only 9.5% alcohol.

The pét-nat brands Piggy Pop and Astro Bunny are the brainchild of UK Master of Wine, Tim Wildman. A self-professed pét-nat obsessive, Tim has been dedicated to making his immensely popular, sustainably-grown South Australian pét-nat wines for over a decade now. And I have to say, I’m a fan!

The Piggy Pop is crafted of 48% Nero d’Avola, 23% Mataro (aka Mourvèdre), 10% Fiano, 10% Zibibbo, and 9% Arneis. The cloudy, hazy watermelon colored wine offers up a nose of raspberries, violets, and candy apple. Fizzy and frothy on the palate with wild strawberries. raspberries, grapefruit, blood orange and a touch of bitter orange on the finish. I loved it! So fun and fruity and perfect for the pool.

I got both of my wines at one of my favorite, indy wine shops – Heights Grocer. Like the winemakers that make these wines, you sometimes have to step away from the ordinary, big box stores to expand your wine horizons and taste something unique. And for my Houston peeps, I’ve been eyeing a couple more South Australia pét- nat wines from my friends at Camerata. Additionally, wine.com has a solid selection of pét- nat, including my ‘Tuff Nutt’ wine.

Cheers to fun, quirky bubbles. And be sure to check out what wines the other #WorldWineTravel bloggers have discovered. 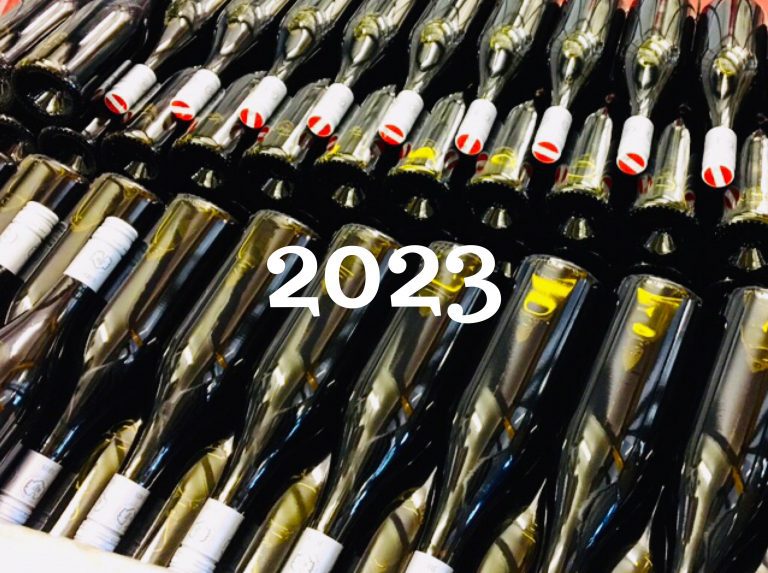 Well, my plan was not to write anything in January 2023. I was going to use the month to rest, catch up on stuff, etc.