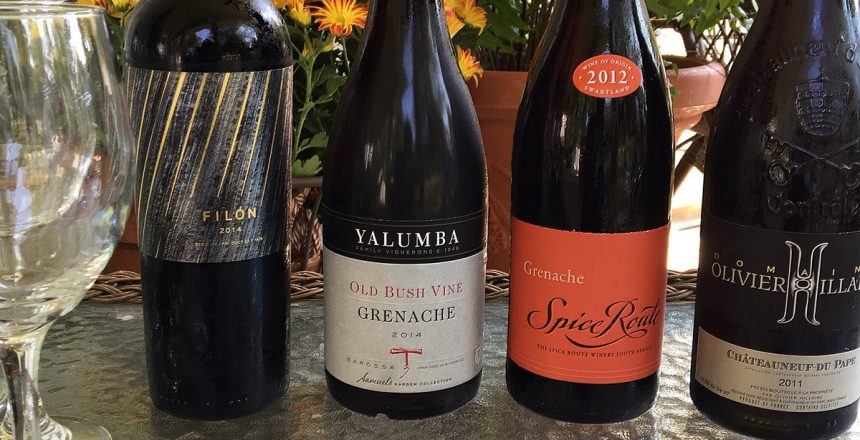 So here we are once again celebrating International Grenache Day, which is the third Friday in September. Grenache is one of those oft unknown, unsung grapes that is responsible for some of the world’s fantastic wines. It can be a bit of a chameleon but overall it’s usually easy drinking, medium to full-bodied, not overly tannic, and smooth. But be careful as these wines also tend to be higher alcohol. Read a bit more of the grape’s history and characteristics from my coverage of last year’s Grenache Day.

This year, I wanted to taste a larger variety of Grenache (Garnacha) wines this year, so of course I assembled the #WineSquad to help me taste and evaluate the wines. Although Grenache tends to be quite versatile as far as food pairing is concerned, I kept the food simple (yeah OK, I just didn’t want to work that hard) and just had some meats and cheeses. 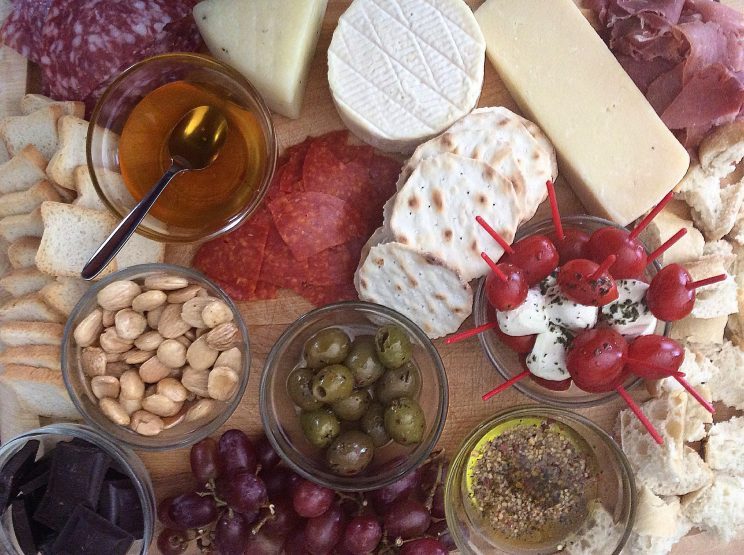 And as usual, people had some pretty strong opinions about what they liked and didn’t like. But that’s all in the fun. We rated the wines on a 1-5 scale with 1 being the lowest and 5 the highest.

First up was the 2014 Filon Garnacha (the Spanish call is Garnacha instead of Grenache) from Spain. 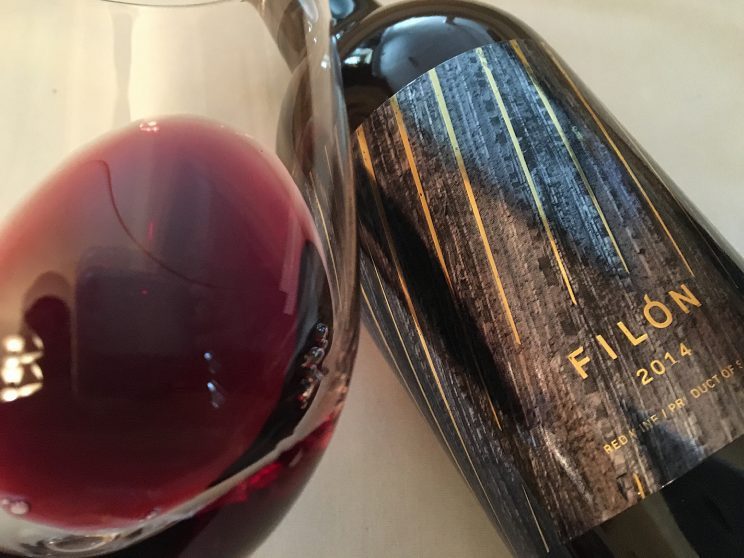 So this was seriously a bargain at $10. I put this one first as I suspected it would be the lightest of the bunch. It’s from the Calatyud region in Northern Spain. Eleven grape varieties are authorized in the region but Garnacha is the dominant variety. The grapes in this Garnacha come from 20-40 year old vines.

In the glass this was a dark ruby, almost maroon. On the nose, we got cherry, jam, and a hint of spice. Tasting it offered up a smooth wine with lots cherries, a bit of dark chocolate, and some biting acidity on the end. We all rated this one a 3, but I’m almost inclined to bump it up to a 4 given the ridiculous price point. Talk about bang for your buck! It’s not easy to find such a wine at $10.

Next up was the 2014 Yalumba Bush Vine Grenache. 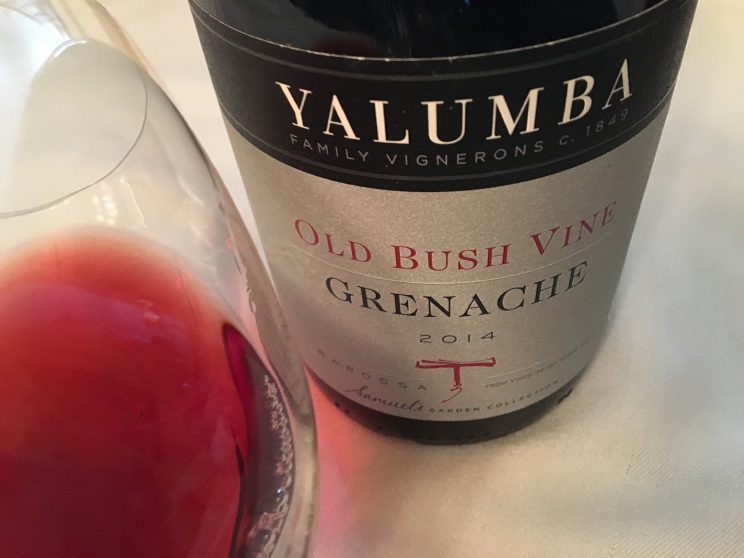 Founded in 1849, Yalumba is Australia’s oldest family-owned winery. The grapes sourced for this wine are from some of the oldest vineyards in the Barossa Valley – some planted back in 1898!

So no one was a fan of this wine. Most tasters thought it smelled “off.” I actually didn’t think that, but was the only one so perhaps my nose was “off” or they were all crazy. Tasting notes revealed comments such as Robitussin cough syrup, bad, and vinegary. Not a shy bunch. I must admit that I didn’t dislike it as much as the #WineSquad but it was definitely my least favorite of the wines we tasted. That being said, I do not believe the wine was tainted or corked. I’ve had the misfortune of opening a corked bottle and had to pour it out. Hurt my feelings. I rated this wine a 2 but everyone else rated it a 1. Of course I found all of this very interesting as this wine was rated 90+ by a couple of wine critics. And that’s why we taste the wines. I really am thinking about getting another bottle just to see. I mean, how can a wine be rated so highly yet we all hated it?

Our third wine was the 2012 Spice Route Grenache from South Africa. 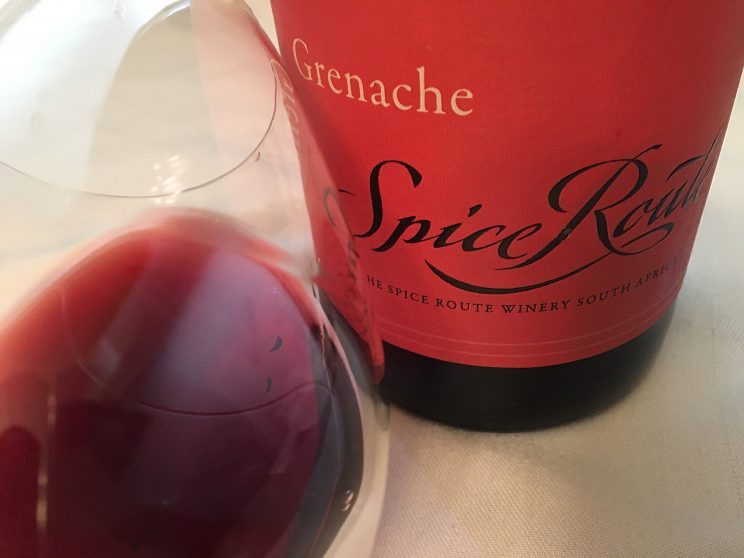 I’m pretty sure I’d never had or even heard of a Grenache from South Africa so wasn’t sure what to expect. Always learning. This wine is from the large wine producing area of Swartland in South Africa. Swartland is about an hour north of Cape Town in the Western Cape of South Africa. The grapes for this wine were the product of bush vines. This is also try of the previous wine. Bush vines are less productive and yield smaller amounts of fruit than trellised vines. And because of the way they grow, they must be harvested by hand. These vines essentially grow wild with very little irrigation. There are critics of this method of grape growing but advocates say the grapes end up with thicker skins and more intense, concentrated flavors.

This wine garnered mixed reviews from the #WineSquad. At first taste, everyone was ready to rate it a low 1 on our rating scale. But when they paired it with some of the food, they actually thought it wasn’t bad. We all liked it with foods that had some fat such as the marcona almonds as well as the cheese. After actually tasting it with some food, most of us elevated it to a 3. I actually had some the next day and thought it had improved a bit more.

On the nose, this one was very earthy with slight hints of fruit and spice. Pretty much every taster aside from me wrote “sour” when describing the taste of the wine. I actually didn’t get sour, instead I got a bit more earth and some spice along with some not so well integrated tannins. But like everyone else, this wine was significantly better for me with food. Which I actually think is a great thing. So then we launched into a discussion about wines meant to be paired with food versus this that could be drunk on their own. But we’ll save that for another post.

Our final wine was from Domaine Olivier Hillaire and hailed from Châteauneuf-du-Pape, which is in France’s Southern Rhone region. 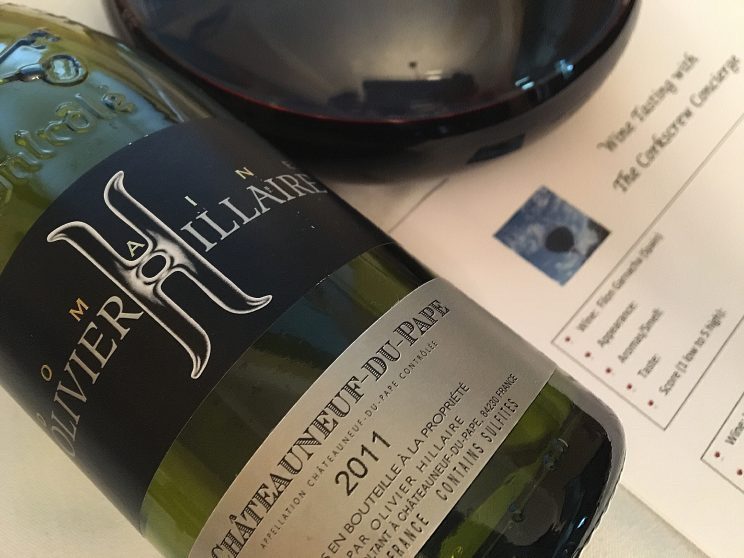 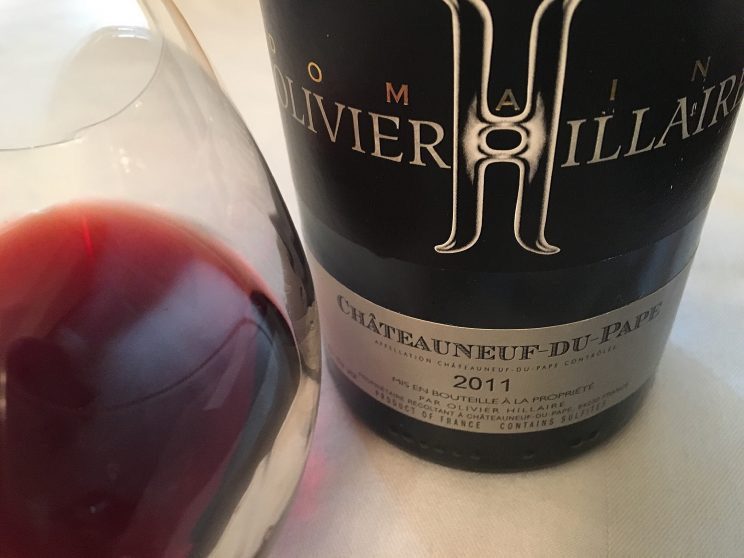 While the Châteauneuf-du-Pape AOC permits eighteen different grapes in its red wines, the most predominant by far is Grenache. The Southern Rhone region was the second French wine region I fell in love with after Burgundy. I think one of the reasons I so enjoy these wines is that I don’t have to wait forever for them to age and mature. While many of them are age worthy, many are also approachable in their youth.

This particular one was 90% Grenache and 10% Syrah. And no surprise to me, it was everyone’s favorite – by far. Everyone gave it a score of 5. In the glass this one was the darkest with some brown around the edges. We all picked up spice on the nose as well as cherry in some form (black cherry, good cherry, cherry snow cone). Yeah, there was cherry. There was also some sweet jam and licorice aromas. In the mouth, there was more of the cherry and jam as well as some spice. Very smooth tannins made this one approachable on its own. This definitely confirmed to me why CDP is a staple in my cellar.

So while all of the wines were not a hit, I loved being able to introduce a couple of folks to some new wines. Everyone came away with a newfound appreciation for CDP if they didn’t have it before. That’s certainly what part of this journey is about. 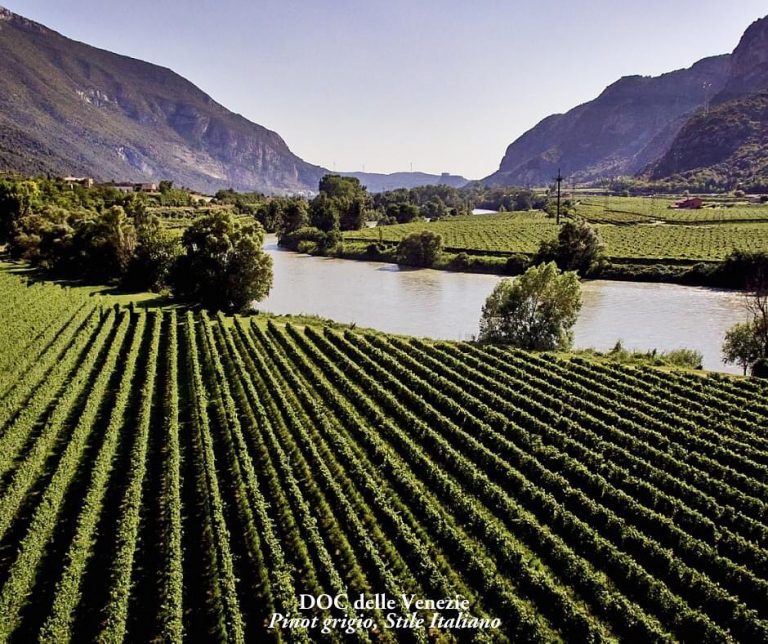 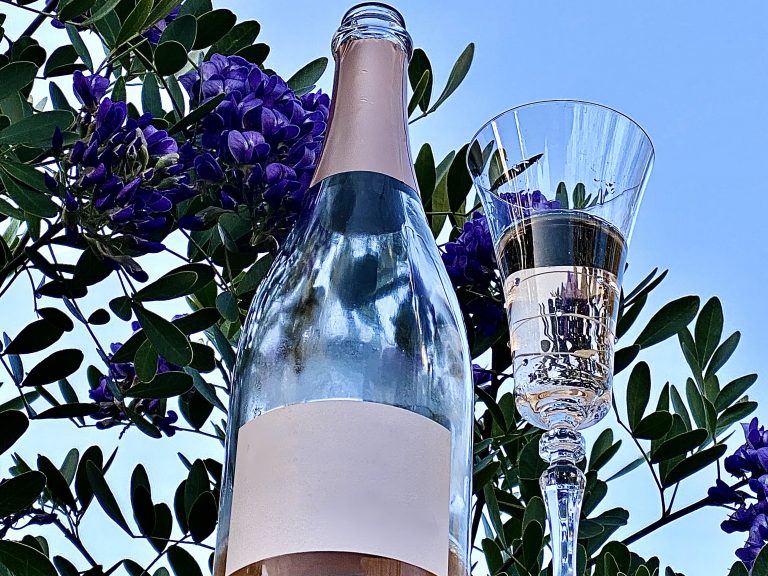