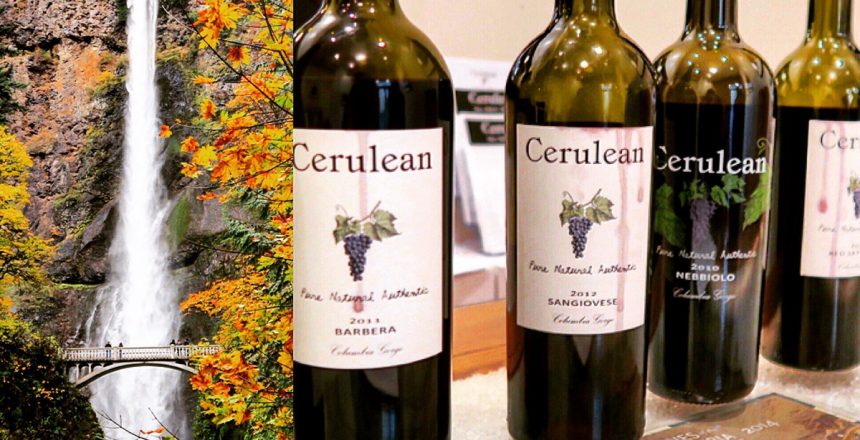 After tasting the lovely wines of the Willamette Valley (you can go back and read that here) we also made it a point to see the Columbia River Gorge with its numerous waterfalls and absolutely stunning scenery. I have to say that I was awestruck! Now this is where you want to go hiking! 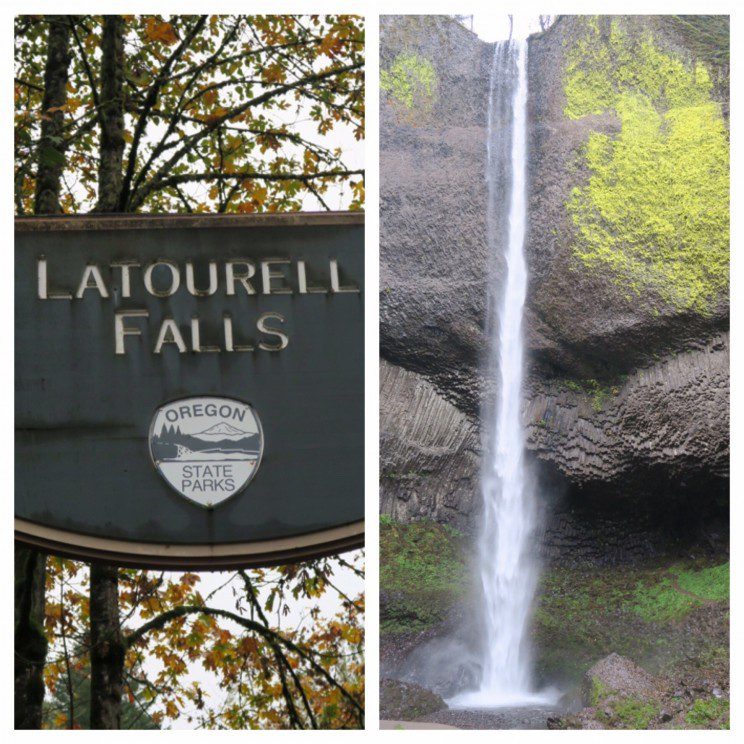 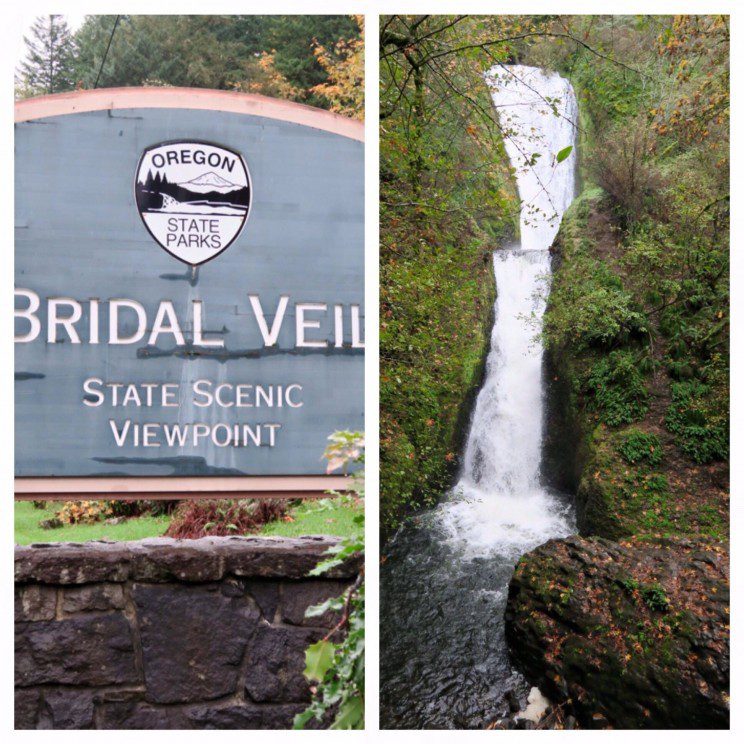 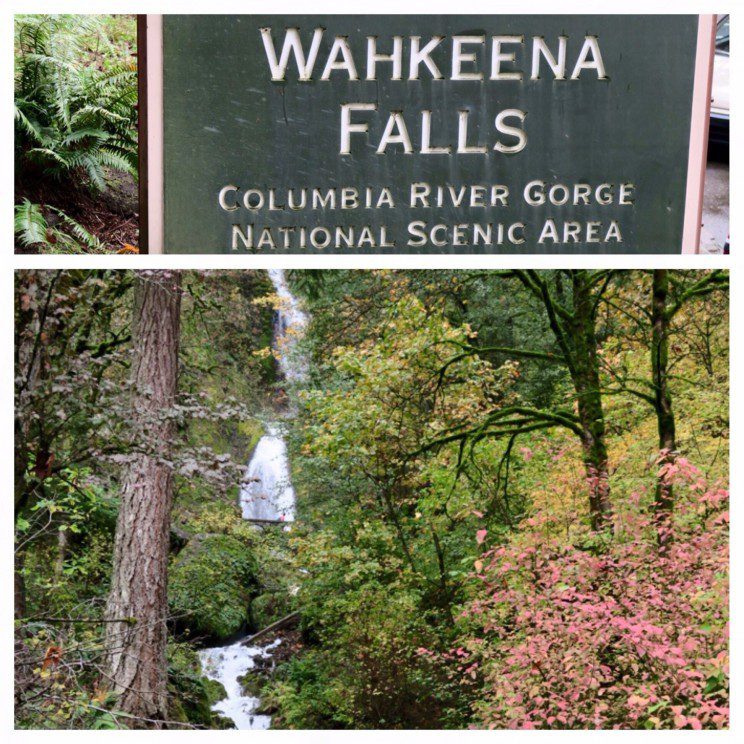 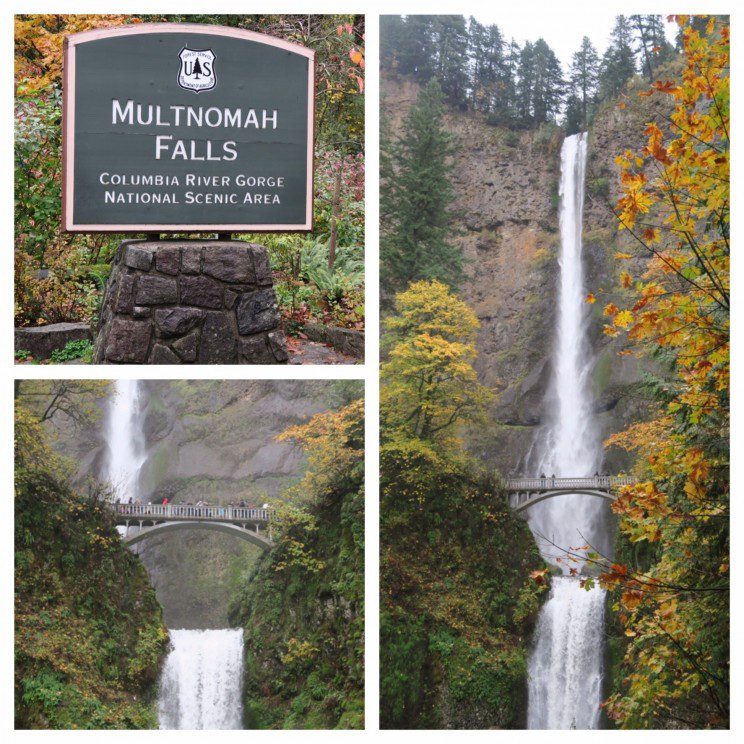 While I knew something about the Columbia River and its history (Lewis and Clark anyone?) I had no idea that there was a Columbia Gorge wine region. Until now, I’d never even heard of the Columbia Gorge AVA. Everything I knew about Oregon wine was all about the Willamette Valley. Well, now I know! And now I had another region for wine tasting in Oregon.

The Columbia Gorge wine region straddles the Columbia River and is unique in that it includes parts of both Oregon and Washington states. There are thirty different grape varieties available within the forty mile stretch of the region. They refer to it as the “World of Wine in 40 miles.” So you would have major issues if you can’t find something to drink! And I find it so fascinating that such a large variety of grapes can be grown in such a relatively small area. The region sees a dramatic shift in geography, climate, and elevation from the cool and rainy foothills of the Cascade Mountains in the west to the area east of Mt. Hood, which is practically hot, dry dessert – all of which is defined by the mighty Columbia River at the heart of the region. Yeah, I liked geography in school. Explains a lot, right? We were told by a couple of folks that for every mile driven from west to east, an inch of rain is lost. An inch per mile! So you go from rainy and cool Portland to very sunny, dry, and hot eastern Oregon. It’s this dramatic change in conditions that affords the ability to grow so many diverse types of grapes. OK, so I’m done with my geography lesson now.

I’d done some research on the wineries I wanted to visit and was tempted to try to drive to them while we were out there, but I also wanted to experience the amazing scenery of the area. So I made a compromise and decided to just visit the tasting rooms that were located in the town of Hood River. Of course you don’t get the vineyards and romantic views that are typically associated with visiting the actual winery, but a tasting room still affords you the opportunity to do what is most important – taste the wine. And it ended up not being much of a compromise as I LOVED Hood River! The town is so scenic and sits right on the Columbia River. I would love to go back and use Hood River as my base to explore the area. 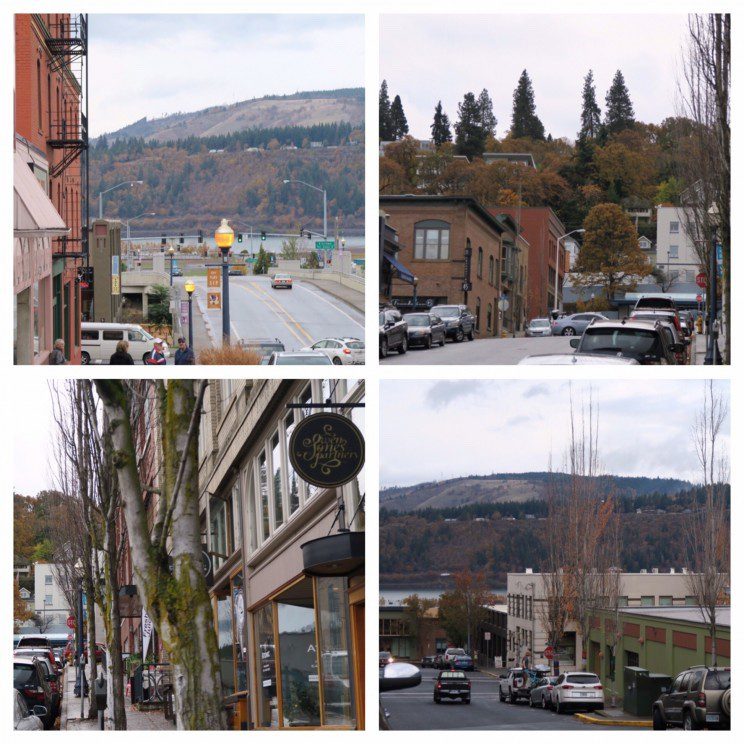 I should note that while I was interested in visiting the wine tasting rooms in town, there is more than enough for the beer lover as well. It seemed like everywhere I looked, there was a brewery calling us in to taste some beer. As it so happens, I ended up being dragged into a brewery to taste some beer. Someone’s gotta do it. 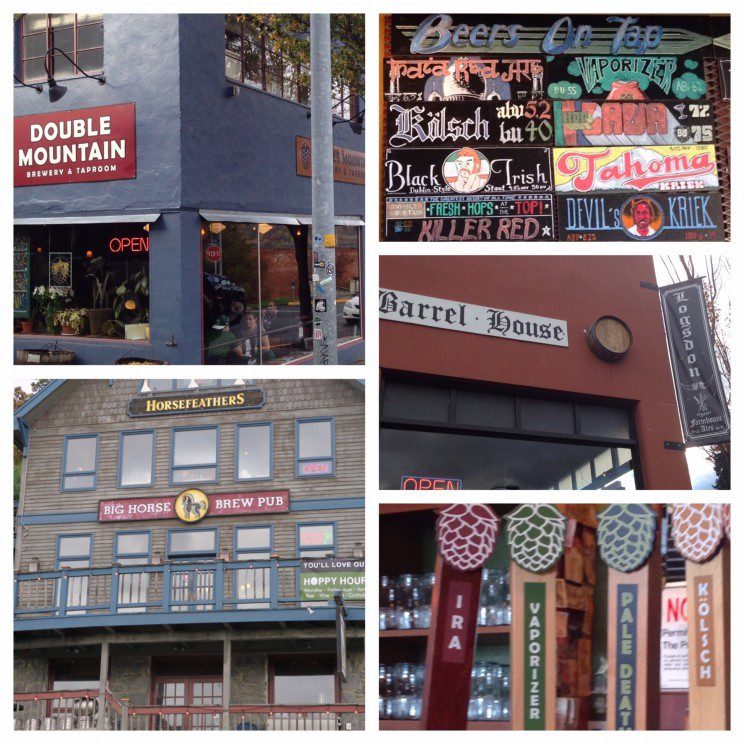 My husband even found a bourbon distillery in town that was having a tasting of a newly released bourbon, Trail’s End Bourbon. As it was just being released, he was able to purchase one of the first bottlings. He was literally able to purchase a bottle from their very first batch. 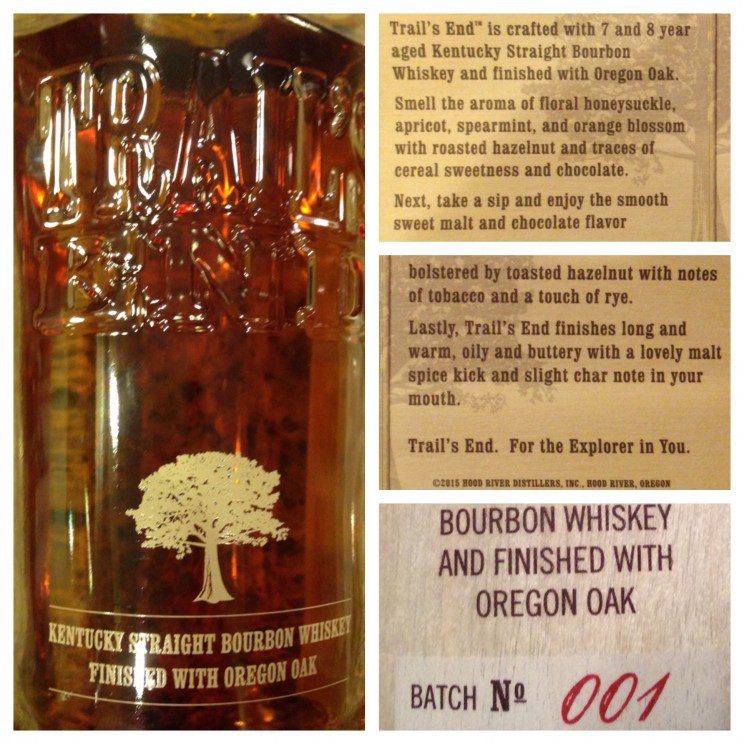 The bourbon is made by Hood River Distillers and is a Kentucky bourbon finished in steel vats that hold Oregon oak wood staves. Apparently there is something quite special about Oregon oak. A taste later at home made me a believer. I loved this bourbon! I just can’t figure out how to get more!

So apparently, drinking is a fun pastime in Hood River (and Oregon in general) and whether you’re into beer, wine, or spirits, they have something for you. My kind of place indeed! But onward to the wine… 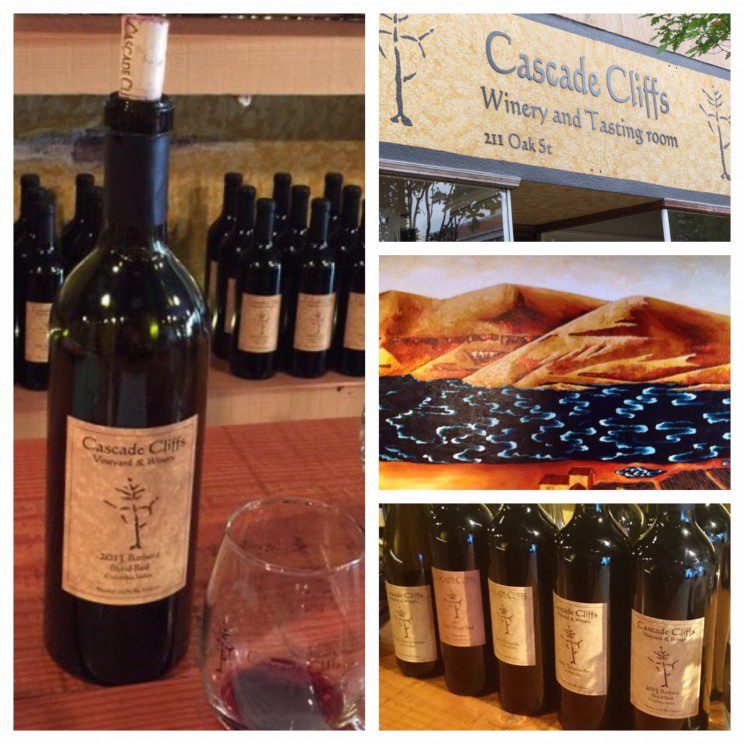 Their main winery and vineyards are located in Wishram, WA on the Columbia River. They focus on the Italian varietals Barbera, Dolcetto, and Nebbiolo and the Rhone varietals of Syrah and Grenache. These are all wines that I tend to be a fan of (except Syrah which I struggle with sometimes) so I was looking forward to tasting their wines. All I can say is Barbera! It was fantastic! They had two – the Estate Barbera and the Blood Red Barbera. They even have a Barbera wine club and given how good it was, I can see why. Now I must warn that some of their wines tended to be at higher price points than some of the other places we visited, but you could tell you were getting a quality wine. So maybe not something to drink everyday, but perhaps worth the splurge.

Cerulean Cellars was located in a little alleyway. I almost didn’t see it, but luck was on my side. My husband left me on my own for this one as he was on to greener pastures when he saw the distillery doing the bourbon tasting. The tasting room was pretty small and sparse, but the wines made up for whatever the tasting room lacked.

Like Cascade Cliffs, Cerulean offered several Italian varietals. While I was intrigued by a couple of their white wine offerings, namely the Gewurtztraminer and the Riesling, I decided to stick to the reds and just went down the list and tasted all six red wines. And while I didn’t love the Barbera as much as liked the one at Cascade, I really enjoyed the Tempranillo and the Sangiovese. They were both very approachable and relatively fruit forward, but still with some structure. I was ready for some pizza right then and there! More than that, I ended up with a very engaging server who had only lived in Oregon for about a three months, which seemed to be a trend. He was the third person that day that told me they’d just moved to Oregon. Perhaps they know something I don’t…

Our final tasting stop in Hood River was Stoltz Winery. The winery sits in an old house up on a hill with sweeping panoramic views of town and the Columbia River Gorge. The house is the oldest in all of Hood River and has a really interesting history. Before it was turned into a winery, it served as a mortuary for forty-five years. The cool, chilly basement served as the cadaver laboratory back then and surely serves the wine barrels well today. People always talk about the “Angel’s Share” when making wine (the portion of alcohol that evaporates out of a barrel and goes to the angels), so perhaps they have the “Ghost’s Share” here? Funny? Not so much? 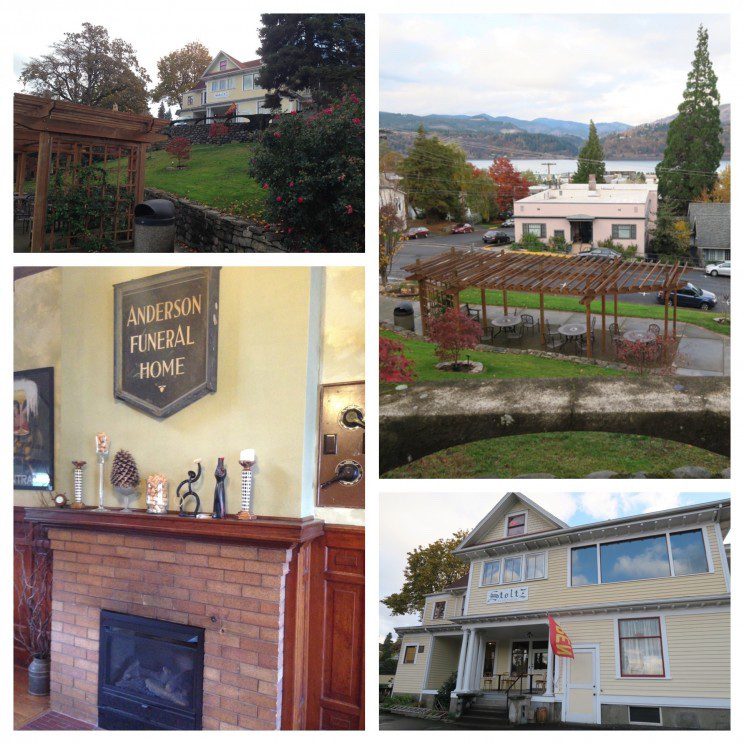 We tasted four wines and I will say these were quite different from everything else we’d had. 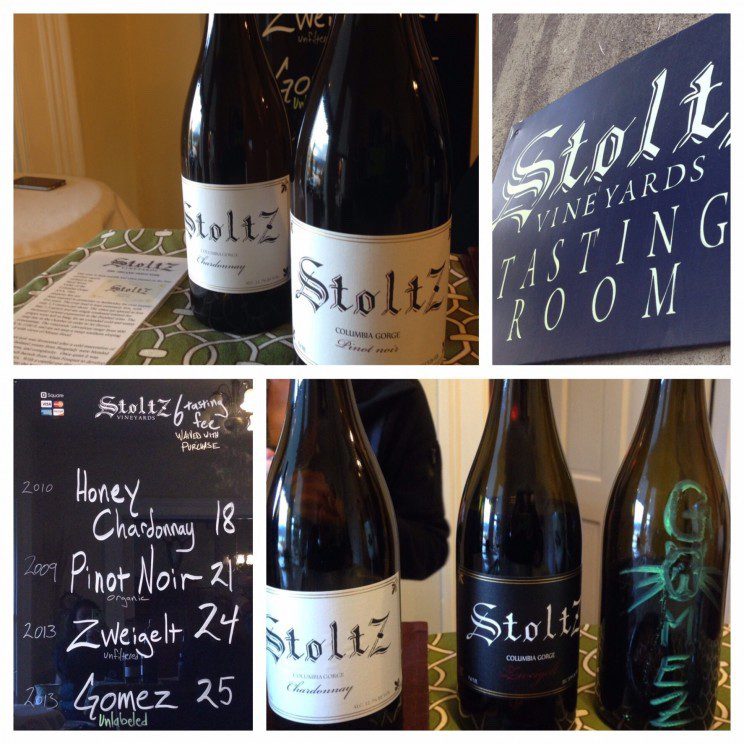 I don’t drink a lot of Chardonnay, but found theirs to be interesting. It was infused with blackberry honey, and while somewhat sweet, it wasn’t overly so. The Pinot Noir, with grapes grown in the Gorge area, was very smoky and quite different from the Pinots I’d tasted from the Willamette Valley. The last two wines I tasted were the most interesting – their Zweigelt and Gomez wines. The Zweigelt, like their Pinot, is also an estate wine. Zweigelt is a red grape that is predominantly grown in Austria. In fact, the winery brought in the seeds for their Zweigelt from Austria. The Zweigelt is blended with a bit of Blaufränkisch, which also hails from Austria. I thought the wine was interesting, but not sure how big a fan I was. It was OK, but I think I was having trouble with the fact that it was unfiltered. I hear these grapes are definitely an acquired taste. The last wine I tried was called Gomez, which is named after the winery cat. It’s a blend of Petite Sirah and Grenache so there was a good chance that I would like it and I did. They had literally just bottled it so it didn’t even have a label. They’d just drawn a picture of a cat on the bottle in marker to indicate what it was. A definite first for me!

All I can say is that I can’t wait to go back to see more of the Columbia River Gorge. From the spectacular views along the way to learning about and tasting the wines of a whole new region, it was quite an experience. So if you were like me and thought Oregon was all about the Willamette Valley, think again. There is so much more! Not to mention that I now need to visit the Washington side! 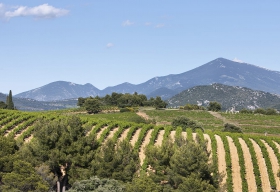 Why You Should be Drinking White Rhône Wines #Winophiles

You know what its like when other folks get all the spotlight? When you’re just relegated to the background and forgotten? Well, that’s what the