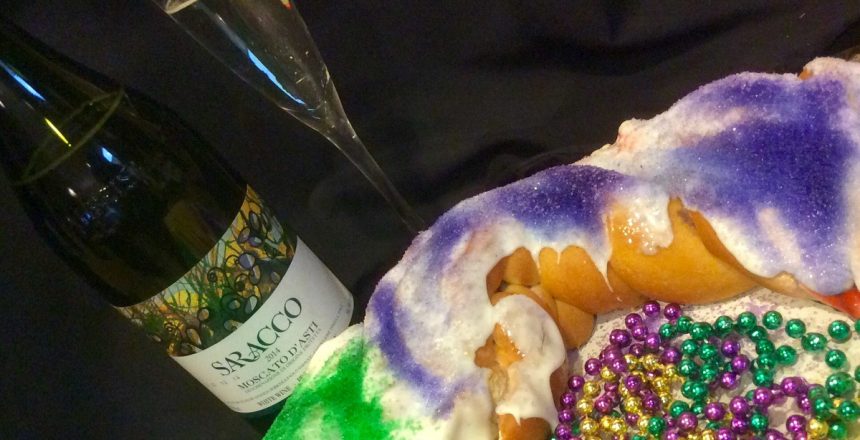 I’m a huge fan of Mardi Gras. And along with my love of Mardi Gras, is a love a Cajun and Creole cuisine. My better half is from south Louisiana so it was kinda written into the wedding vows. I also love to hear stories about Mardi Gras when he was growing up, particularly those related to Courir de Mardi Gras. Now this is different from the carnival type Mardi Gras many of us associate with New Orleans or Rio de Janiero. This is more of a family, communal celebration that was, and still is, practiced in rural communities and which traces its origins back to medieval France. Courir de Mardi Gras means “Fat Tuesday Run” in Louisiana Cajun/Creole French. As part of the Courir de Mardi Gras, members of a troop called a “Mardi Gras” would gather ingredients to use in preparation for a community gumbo to be made later that night. Le Capitaine, who was the leader of the Mardi Gras, would ride his horse while leading a group of other masked riders or runners and go from house to house gathering ingredients for the gumbo. The procession is many times accompanied by bands playing music. 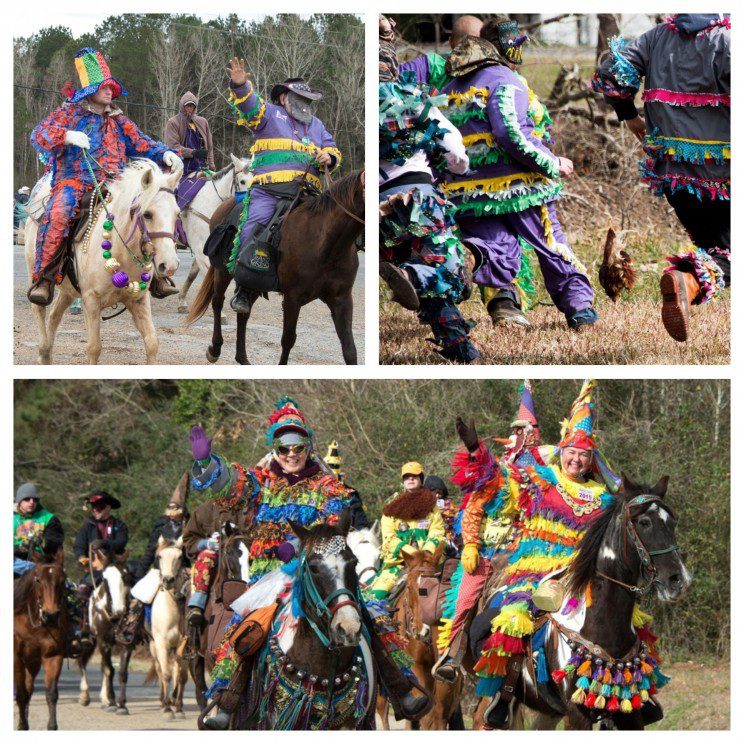 In order for the homeowner to provide the group with an ingredient for the gumbo, the troop would have to perform and earn the offering. Sometimes they would sing and dance, and other times they would participate in a chicken run. As chicken is one of the most important ingredients in a chicken and sausage gumbo, it was very much a prized ingredient. To earn a chicken, the homeowner would throw the chicken (or sometimes a duck or guinea) in the air and the members of the troop would have to literally run and chase it down. So imagine a bunch of drunk folks running around trying to catch a chicken! According to my husband, when he was a young boy, he had the record for two years straight catching the most chickens. He even caught a guinea once. Makes sense to put the kids up to it as I imagine the adults were feeling pretty nice from all the liquid revelry. Once the group gathered all of the ingredients for the gumbo, the community would get together to cook and eat the gumbo in a large, booze filled celebration that ended before Ash Wednesday and the beginning of the Lent season.

During the Mardi Gras season, I usually cook a variety of Cajun and Creole dishes to celebrate the season. I cook these dishes all year long, but we seem to have more during the Mardi Gras season. So of course, one of the first things I always make is gumbo. Given its ties to the season, the fact that the weather has turned cold, and the fact that it’s just so darn good are all reasons to cook up a large pot. And there is no such thing as a “small” pot of gumbo. I also get a delicious King Cake and hide the baby inside and Thing 1 always “miraculously” gets the slice of cake with the baby. Of course, I don’t ever recall her paying for next year’s cake. In addition to gumbo and the King Cake, we also feasted on fried shrimp po-boys, fully dressed and pork loin stuffed with andouille sausage, amongst other goodies.

As I’m burning it up in the kitchen, my mind is never far away from what wine I’m going to pair with my food. I definitely like to get my drink on while I’m getting my eat on! Mardi Gras food and wine? Don’t fear. It can be done! And let’s just get this out of the way – yes, I know beer is great with gumbo, po-boys, etc. I know! I know! But I don’t always want a beer and given how filling the food is, I want my drink to be a little less filling.

So for the gumbo, I cook it with a little bit of spice, but knew it would get even more spicy when I added in a couple of drops of Louisiana hot sauce. And it has a lot going on with the dark roux, sausage, chicken, and blue crab. If it weren’t for the spice, I probably would have gone for a buttery Chardonnay, but given the spice, I opted for a Riesling. Well, two Rieslings. Riesling ended up the wine of choice as the sweetness of the wine acts to tame the spiciness of the food. 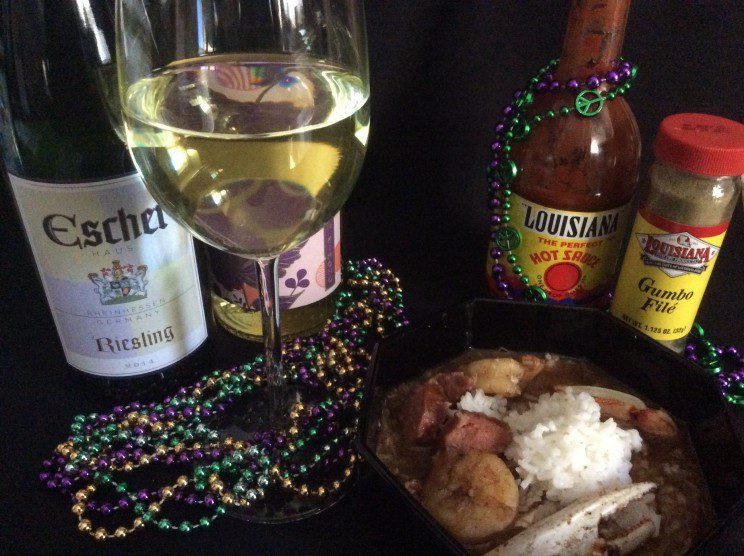 The first was a 2014 Escher Haus Riesling from the Rheinhessen region of Germany that I paid $12 for. It was off-dry, meaning it had some sweetness but also offered up some acidity and citrus and mineral notes to provide some balance. Even with the balance, this may have normally been a little too sweet for me, but with the heat of the gumbo, it was great. I also opened a 2013 Open Kimono Riesling from Washington State. Washington State makes some very nice Rieslings (Chateau St. Michelle is quite well known) so I definitely wanted to try a new one from there. This one was also off-dry, seemed a little less sweet than the German Riesling, and was quite elegant. I paid $10 (regular price was $14) and I could definitely see me sipping on this in the heat of the summer. I actually liked the German Riesling a bit more with the gumbo which I attribute to the lower alcohol level. The Escher clocked in with 10.5% alcohol while the Open Kimono had 12.5%. When having spicy food, lower alcohol levels are your friend. High alcohol wine just makes the food taste even hotter. And be sure your wine is very cold.

Next up was the crowd pleasing fried shrimp po-boy. When I think of salty, fried food like French fries, fried fish, and even fried chicken, one of my favorite things to reach for is a dry sparkling wine. When thinking about what to pair with my fully dressed fried shrimp po-boy, I didn’t think twice. It was definitely going to be a Champagne kind of day. The Champagne Barons de Rothschild Brut was perfect with the yummy saltiness of the fried shrimp po-boy and fried onion rings. And yes, I splurged on this bottle (around $80) but hey, why not treat yourself sometimes? While I went a little high end, any dry sparkling wine would fit the bill.

I love, love paring Champagne with my meals. I used to save these wines for special occasions, but over the years I’ve found that they are so versatile and go with so many different types of foods that I don’t hesitate to whip them out now. The thing to remember about Champagne is that it loves fat and it loves salt. One of my favorite things to eat with Champagne is potato chips. Plain old salty chips. Good stuff. Oh and buttery, salty popcorn too. These pairings work because of the crispness and acidity of the wine, which can cut through the fat and salt. But you want a dry wine, so think Brut.

Pork tenderloin is great on its own. But then stuff it with andouille sausage and then add some bacon and you have quite the creation. The perfect melding of delicious pork flavors. Andouille is a smoked sausage made using pork. In fact, some producers use the entire pig. If you’ve never had it, don’t be alarmed. It’s a delicious, smoky, rich sausage that is great in flavoring dishes that call for smoked meat. It originated in France but was brought to Louisiana by French immigrants and Acadians from Nova Scotia and is generally associated with Creole cuisine. 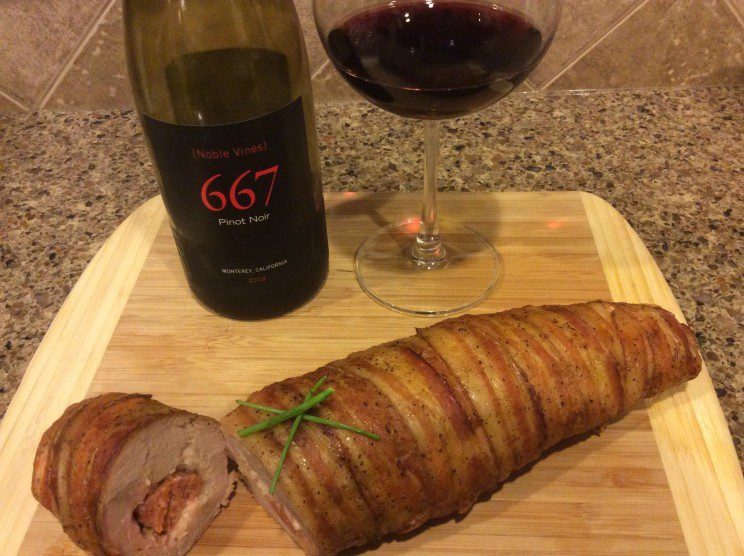 So what to pair with such a creation? Pinot Noir of course. I love Pig and Pinot together! Now I didn’t want a lightweight of a Pinot. I definitely wanted something with some body that could stand up to the andouille. I’d discovered a fairly inexpensive Pinot ($11) – the Noble Vines 667 Pinot Noir – that I thought was pretty good. It had some dark cherry fruit as well as some earthiness, along with good acidity and decent tannins which could go toe to toe with the fatty andouille. And just to note, I liked this wine much better a few hours after I opened it so give it some time.

Finally, the must do for the Mardi Gras season – a King Cake! We got ourselves a creamy King Cake filled with a strawberry cream cheese filling. My initial thought for this was a Prosecco, but the more I thought about it, the more a Moscato d’Asti seemed to fit the bill. 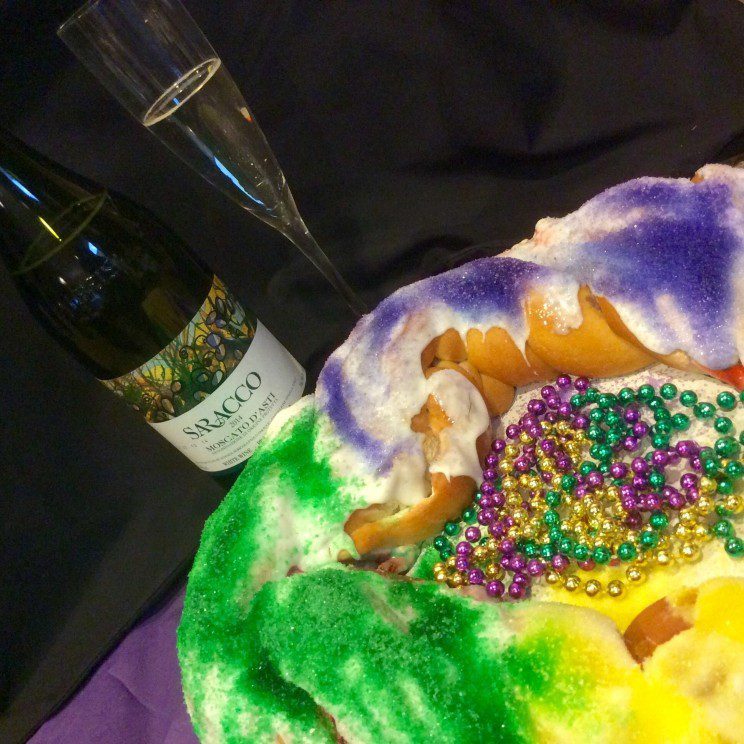 I went the Moscato route as I knew I needed something that was sweeter than the King Cake itself. When looking for a wine to pair with dessert, you want the wine to be as sweet as or sweeter than the dessert. If the wine is less sweet it will taste more bitter and tart. In the interest of full disclosure, I will say that I’m generally not a big fan of Moscato d’Asti. But I’d previously had the Saracco Moscato on a few occasions (I keep several bottles on hand as my mom is a big fan) and it was one that I really liked. Paired with the King Cake, it was downright magical. Who knew? Those bubbles were the perfect enhancement for the strawberries in the King Cake. 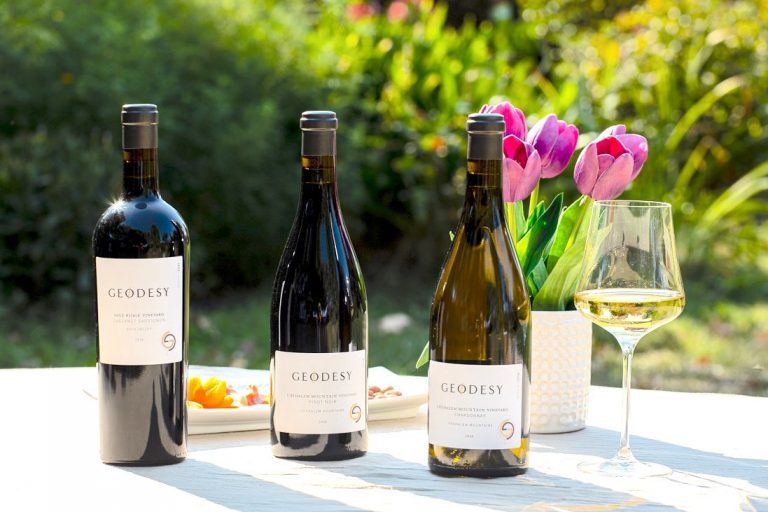 Geodesy Wines: Paving the Way for Women in Wine & Agriculture

Aside from the obvious, one of my favorite things about wine are the great stories behind the bottle. So of course, when I heard the 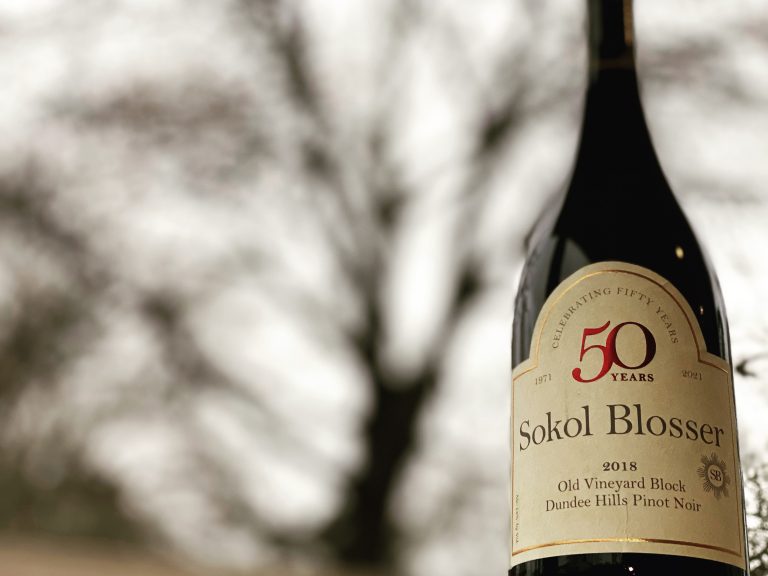 And my love affair of Oregon’s Willamette Valley continues. Not long after the likes of David Lett, Charles Coury and Dick Erath laid the foundation